For an explanation of this series, and meals #1 and #2, go here.

Tonight’s meal once again comes from Rachael Ray 365:No Repeats

The recipe is a variation of the Master Recipe titled “Chicken, Veal, or Pork Schnitzel with Red Caraway Cabbage.” The variation is for “Cutlets with the Works! Breaded Meat with Mushroom and Onion Gravy, Bacon, and Cornichons.” (Recipe at the bottom of this post.)

Due to tastes and using what I had on hand, I had to make a few variations to the original recipes. But that is one thing I always appreciate about Rachel Ray’s recipes – they lend themselves to variation. In fact, on her shows and in her cookbooks, she encourages it. 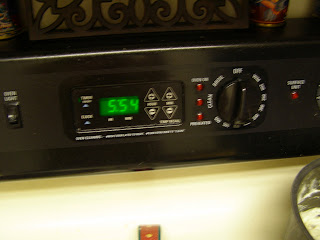 I started prepping this meal a little later then usual. My husband had to work and we knew he’d be a little late for our regular 6:30 dinnertime. I do these real-time 30 Minute Meals only on the weekends because that is the only time I can stand cooking right before dinner time. I think one of these days I’ll try this process Stolen Moments-style and see how that works. 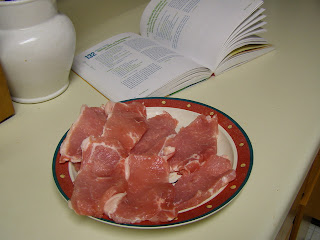 We do not eat pork very often, but I was able to snag a nice looking package on Manager’s Special a few weeks ago. It has been sitting in the freezer just waiting for this meal. The package contained 4 thick, boneless chops, so I butterflied them. 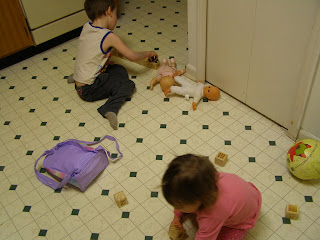 The kids were in the kitchen with me right from the start. 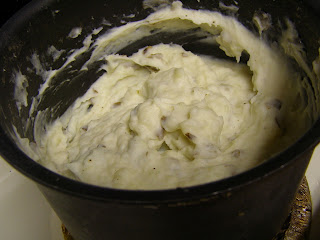 I don’t think our family has ever eaten red cabbage. I’m not at all opposed to trying it, and I’m sure we will someday. But for this meal, I opted to go with homemade smashed potatoes instead. I did make these earlier in the day and they stayed warm in the oven while I made the rest of the meal. 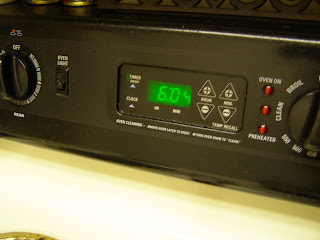 After butterflying the chops and helping the kids get situated, I realized that 10 minutes had already passed and I really hadn’t gotten anything done! 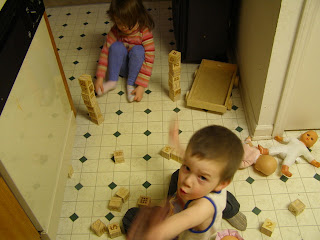 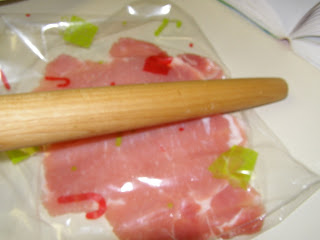 I pounded the chops in a plastic bag with my rolling pin. Even though the recipe called for this method, I probably would have done it even if it hadn’t. That is one of my favorite ways to stretch meat. 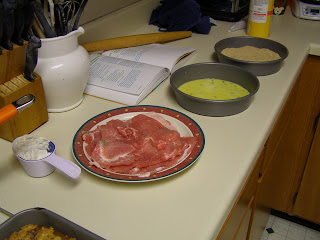 Here is everything I need for breading the pork all lined up. I used to think meals like this one were very labor-intensive, but now that I’ve gotten the hang of the assembly line preparation, it really doesn’t take much time at all. 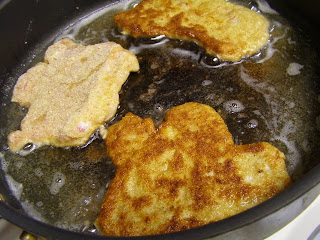 The first portion cooking in the skillet. 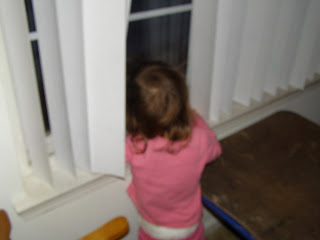 Gracie left the kitchen so that she could watch for her dada to get home. 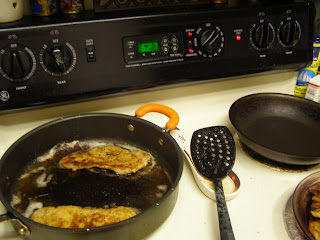 This is the last batch of pork. The other 6 pieces are in the oven being kept warm, along with the smashed potatoes. 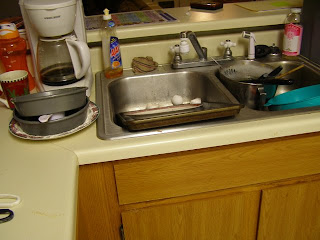 Messy, messy, messy! I wish I had a personal dishwasher. Someday soon I’ll have to start training the kids. (Our 9 year old loads the dishwasher with mad skill, but when it comes to actually washing things? Not so much.) 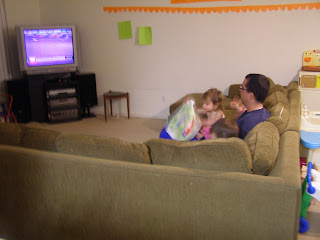 My husband got home from work just as I finished pulling the last of the pork out of the skillet. However, I still had to make the gravy. So he and the kids piled on the couch to watch NASCAR together. 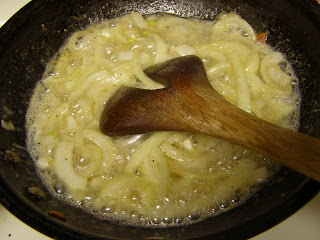 Here is the gravy, after the onions have cooked in the bacon grease and the flour has been added. 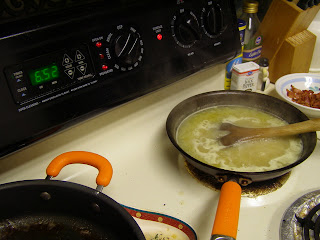 The gravy is boiling away, but it’s just about done. Right after I took this picture I started plating all of the food. So, we’ll clock this one in at right about an hour. It could have been better if I’d been a little more on task and not gotten distracted with the kids a few times. But, I’ll be cooking for years and years to come and I’ll only have little ones for awhile. It’s so much more important to enjoy them now then to worry about actually completing a 30 Minute Meal in 30 minutes. But I’m just keeping it real! 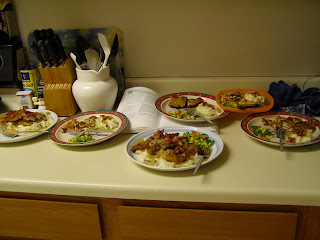 And here are all of our plates. Everyone loved this dinner and ate every last bite. That makes it a winner in my book.

Here is the original recipe for the meat. You’ll notice I left out the mushrooms (the ones in my fridge were looking iffy at best), parsley and the cornichons. 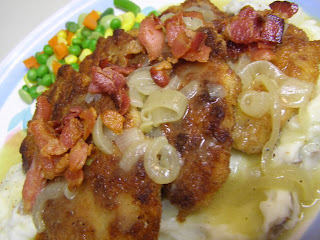 Pork Schnitzel Cutlets with the Works! Breaded Meat with Mushroom and Onion Gravy, Bacon and Cornichons

1. Place chops several inches apart between wax paper (or in a plastic bag like I did). Pound the meat until very thin using a small heavy skillet or mallet (or rolling pin).

2. Season the meat with salt and pepper and dust in flour. Beat the eggs and milk or cream in a large shallow dish. Combine the bread crumbs with the nutmeg and more salt and pepper and place on a large plate. Coat the meat in egg, then in crumbs. Heat a large nonstick skillet over medium to medium-high heat with just enough oil in it to thinly coat the bottom of the pan. When the oil gets wavy looking, add the meat in a single layer and cook until golden on each side, 3 minutes each. Transfer the meat to a plate and repeat, if necessary. Reserve the cooked schnitzel under a loose foil tent.

4. When all of the schnitzels are cooked, wipe the skillet clean and return the pan to medium-high heat. Add the bacon and cook until crisp and brown. Drain on paper towels, reserving a tablespoon or so of the rendered fat in the pan. Add the onions and mushrooms and cook for 5 minutes. Season the veggies with salt and pepper. Add the flour and cook for a minute longer, then whisk in the stock and thicken a bit, 2 minutes. Add the parsley, adjust the seasonings in the gravy and remove from the heat.

5. Top the schnitzel with the mushroom and onion gravy, crispy bacon bits, and chopped pickles.

Be sure to check out We Are THAT Family for more WFMW.